By BRYAN SMITH
Reprinted with permission from The Diamondback
Originally Published: Monday, March 21, 1988

In the blustery chill of a brisk spring afternoon, fire Engine 11 rumbled to a halt in front of St. Mark’s Catholic Church bearing the coffin of Alan Sondej, a volunteer firefighter who died of injuries attempting to rescue occupants of a burning home.

Members of the Hyattsville Volunteer Fire Department, where Sondej had served for 11 years, covered their badges with black tape and stood at attention as family members emerged from their cars, holding each other for support. They joined a crowd of about 500 who gathered for the funeral service in Hyattsville to pay homage to the 37-year-old campus graduate geography student.

Alfred Sondej, Alan’s father, watched grimly as the coffin was taken into the church, then slumped over, weeping.

Known affectionately as “Big Al,” Sondej entered a burning house in Avondale January 27 to rescue supposedly trapped victims when flames suddenly engulfed the room and set fire to his clothes.

But the lone occupant had escaped the house just prior to Sondej’s arrival.

Sondej received burns over most of his body and was transported to the Washington Hospital Center MedStar Burn Unit with third-degree burns. He remained there until his death from burn complications last Wednesday.

“Once again we are reminded of how dangerous the job of firefighting can be,” Prince George’s County Fire Chief Jim Estepp eulogized. “Alan was destined to be a firefighter and blessed with God-given attributes and good nature that made him truly exceptional.

“When asked to describe Al, friends may say that he was witty, extremely intelligent, always willing to help … The descriptions vary, but everyone agrees — Al Sondej was a truly unique individual and a joy to know. I believe the term ‘treasure’ is a very accurate description,” Estepp said.

“He had a real love for life and for people,” said Maj. Frank Colea, a firefighter and close friend of Sondej.

Colea described Sondej as witty, compassionate and committed to non-violence. “Despite the fact that he was 6-foot-2-inch and tremendously strong physically, he would only use his physical strength on behalf of someone in trouble,” Colea said.

During the funeral service, Sondej’s sister, visibly shaken, spoke about her brother. “We cry today as a family, but they are tears of joy not of pain, for being blessed with someone as special as Al,” she said.

As the 1 1/2-hour ceremony ended, Sondej’s coffin was lifted back into Fire Engine 11.

The crowd watched silently as pallbearers set the coffin back in its place on the engine.

The family members filed out of the cathedral and paused, while some 150 officers and firefighters in full uniform stood in rows at attention, giving final salute to their fallen friend and collegue.

Additional Biography
Al was a live-in member at the station at the time of his death and hand been with the Department for almost 11 years to the day.

Sondej was on the department’s ladder truck, now dedicated to him, when it responded to a house fire at 2020 Wardman Road in Mount Rainer in the early morning of Jan. 20, 1988. The female resident of the house was reportedly trapped inside the burning structure.

Several fire fighters from the crew went into the house to search for the alleged victim. A flash-over occurred, causing the room Sondej was searching to be totally overcome with flames.

Sondej received second and third degree burns to more than 60 percent of his body. He was taken to the burn center at the Washington Hospital Center and remained there until his unexpected death two months later.

The woman who was believed to be trapped inside the house was found at a neighbor’s house during the fire, but not soon enough for Sondej to escape before being burned. Two other volunteers escaped injury.

While a student at the Notre Dame University, Sondej took up the cause of world hunger during his undergraduate years. He managed to collect $25,000 from the students outside the school’s dining hall, which was donated to the Third World Relief Fund and other relief organizations.

He graduated from Notre Dame with a degree in sociology and was a graduate student at the University of Maryland at the time of his death.

After graduation, Sondej began an internship with the Overseas Development Council where he traveled across the U.S. to speak on the issue of world hunger. Sondej moved to Washington, D.C. in 1977 to continue his education at Maryland and the Catholic University of America. During that time he worked with the Vatican and did research on ways to solve the hunger problem across the globe.

The Notre Dame Alumni Association’s 85,000 members honored Sondej posthumously in 1990 for his efforts by presenting his family with the Dr. Thomas Dooley Award. The recipient of the award is someone who works to allow others to have the gift of life.

On October 21st, 1953, the Hyattsville Volunteer Fire Department mourned the line of duty deaths of V/FF John T. Streets and V/FF William R. Stainback, both lost there lives when the ladder truck that they were riding on was struck by a truck while returning to the Farragut st station following a fire call. 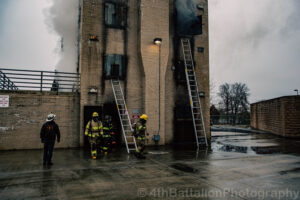