The new pumper was funded in large part to an Assistance to Firefighters (AFG) federal grant as well as financing support from the City of Hyattsville of which we are greatly appreciative. The unit’s call sign will be Engine 801 after being placed in service later this Spring or early Summer. The vehicle was delivered by our Pierce representative Jim Darr of Atlantic Emergency Solutions on Saturday, April 23rd, 2011.

The department’s Apparatus Committee did an exceptional job spec’ing a unit that will service the department, the City of Hyattsville and Prince George’s County for a long time. The delivery caps a five-year period in which the HVFD has replaced its entire-front line firefighting & rescue fleet — Engine, Truck & Rescue Squad companies. Plans are currently underway to revamp our EMS fleet as our call demand continues to rise. HVFD Engine Company 1 Over the Years 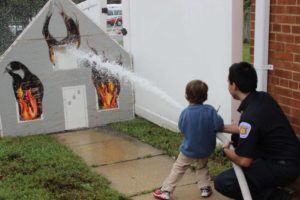